Jeff is joined by Connor to talk about some simple ways to improving a portrait.

In today’s episode we are going to do a little mini mentor session for a listener and Facebook group member Suzy Parish.  Before we do that, the discussion Connor and I are going to have today is just a tiny example of the kind of discussion and learning that happens over in the Portrait Session podcast.

Connor, take just a moment and talk about this last season of Portrait Session.

You can find the Portrait Session podcast over at https://portraitsession.podcast.com

Now let’s talk about the simple steps we can see to help Suzy with her portrait.  I wanted to do this in this episode because I haven’t heard much in the way of this exact thing shared in a podcast.  I mean in personal mentoring, or at something like the Create Photography Retreat you might have someone help you with the setup to get a good portrait, but I wanted to cover it here on the podcast because this is something I wish I had it when I was getting into portraits.

I totally remember being in exactly the same spot as Suzy.  Early on I was taking photos of my kids and trying my hand at landscapes.  As I learned more and made improvement it wasn’t long before I had friends and family asking me to take photos of their families.  I had no idea what I was doing and I got very average, maybe even below average portraits because I didn’t know some of the very basics.  Some simple things that can be done to make a massive difference.

I’m not saying Suzy’s photo is below average like mine were.  But she is clearly frustrated, here is what she wrote in her post: 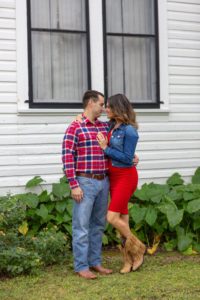 “Please help! What am I doing wrong here. I had my first family shoot with our best friends and my pictures didn’t come out so well. Many of my pictures come out this way regularly and I don’t know what I’m doing wrong. I am so frustrated and disappointed. There’s a screenshot of my camera settings attached too…please look at the zoomed in image. TIA!”

I am excited to do this episode because I think it could help a lot of photographers and I am so glad you could join me at the round table for this one Connor so that you can provide the stuff I would miss.  I want to offer my input on what steps I would suggest Suzy could take and then you can fill in the stuff I miss. Ready to do a little free mentoring for Suzy here Connor?

The portrait itself will be in the show notes, so be sure to check that out at masterphotographypodcast.com.  Suzy was taking a portrait of a couple and she posted what she got along with asking for some help:

Let’s start off with the settings Suzy used.  Not because there is a perfect formula or some ideal settings that are going to work universally for every situation, but because there are a few things that might help a little.  There were lots of suggestions regarding the settings in the Facebook group, so we have to go through them.

What Focal Length for Portraits?

Suzy shot at 70mm here, is that a good focal length for portraits?  It isn’t so much a question of 70mm being good or not, it can be fine for it, but this shot was a full body shot of a couple and so not sure you really needed to go to 70mm here.  The longer the focal length the narrower the depth of field is going to be, a potential concern here with the full frame Canon 5DM3. If it was shot at 50mm you probably get a little more depth of field and with the subject being a wide subject it would match the subject here.

It isn’t that you should avoid 70mm for portraits, it is a great focal length for head shots and other photos where you are filling the frame with a person.  When you have the full body in the shot you may want to go a little wider on the focal length.

What Aperture For Good Portraits?

Suzy shot at f/2.8 here.  This is really the go to for most people when they shoot portraits.  For this particular situation where they are close to the background and multiple people you are trying to keep in sharp focus, then f/2.8 is probably a bit top shallow on the depth of field.  Nothing in the background that you are trying to blur tremendously so playing it a little safer and using stopping down the aperture a bit more would probably help make sure that you have good sharpness for the faces in the portrait.

What Shutter Speed For Good Portraits?

Suzy went with 1/1,000 of a second in her shot, is that a good choice here?  It is definitely fast enough that you take out the possibility for motion blur or camera shake negatively impacting sharpness.  A general rule of thumb is to not take the shutter speed any slower than the focal length. In this shot the focal length is 70mm, so don’t go any slower than 1/70 on the shutter speed.  It is only a rule of thumb, a starting point and something you need to test out with your shooting technique to see if the gear you have and the technique you use that works well.

That said, 1/1,000 of a second is probably a little too fast.  1/250 is about the fastest you really need to go for portraits usually.  That speed might even be faster than you max sync speed so you need to know for your camera what that setting is if you are going to add lighting using flash.

What ISO For Good Portraits?

Suzy shot at ISO 320 here.  Not a problem at all on the Canon 5DM3.  Can go quite a bit higher with the ISO before you take the dynamic range down or have noise become a problem that is making image quality go down.

Suzy probably had to go here because she had the shutter speed up to 1/1,000 of a second.  Probably would have made a little more sense to bring the ISO down to 100 and slow the shutter a little just to get the very best image quality possible, but still not a setting that likely made the sharpness be a little less than she wanted.

Let’s talk about the depth of field.  Connor, she shot at 70mm, so I want you to take a guess at the distance between her and this couple in the photo.  I was going to guess about 15 feet. If I use the depth of field calculator in the Photo Pills app, putting in the information that matters for that calculation:

You want to get the eyes to be the sharpest thing in a portrait, so you point the focus point on the eye.  The closest eye to the camera. If there is more than one person then you pick the eye closest to you. In this case the people are both looking at each other and both are in the same focal plane, so you could pick the closest eye of either person.

You also want to consider things that could cause an issue the focus to get thrown off a little.  In this photo the woman has hair very close to her eye and so picking the eye of the man may have been a little bit better choice.  Still, not likely the cause for any sharpness problems in this situation with the depth of field being so large.

What Caused the Sharpness Issue?

Since the settings and depth of field don’t seem to be something that really could make it responsible for a lack of sharpness.  Guessing there is a problem with the focus alignment for that camera and that lens. Especially because Suzy mentioned this has been a problem with all of her photos.

That is what autofocus micro adjustment (AFMA) is all about, and you can find help with that over at Photo Taco where I walk through all of the details on how to do it.  I will put links on the show notes or you can just go to phototacopodcast.com and search for AFMA.

Maybe that is what ended up making the sharpness soft here.  Maybe Suzy needs to fine tune the autofocus system so that she can do focus and recompose in order to get the eyes sharp. It looks like the focus may be front focusing a little where the depth of field isn’t working around the focus point as you expect and the center of it in this case is in front of where you had it when you took the shot.

Give Yourself the Best Chance at Sharpness

Here are a few things you can do to give yourself the best chance at getting sharp focus.  By the way, we are saying the best chance because there is still the possibility that the focus system is going to get it wrong.  It isn’t 100%. Auto focus does miss, so here is how to give yourself the best possible chance to have it work and have images sharp where you want them to be:

Other Suggestions for Good Portraits

Here a few others suggestions that would improve this photo, though we admit that much of these suggestions is subject to personal style, they are far more subjective.  They won’t have anything to do with the sharpness in the photo.

Connor: DSLRKIT Lens Focus Calibration Tool Alignment Ruler Folding Card(Pack of 2) ($5) A really inexpensive way to do that AFMA to calibrate the autofocus to the lens with your DSLR camera.