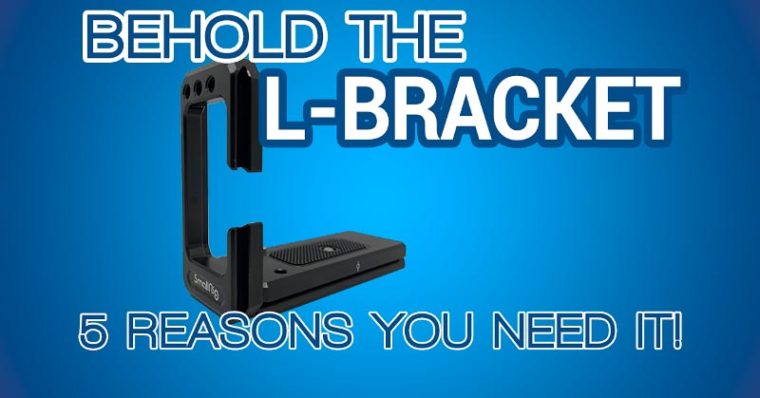 What Is An L-Bracket?

Unlike other pieces of equipment, like say the intervalometer where it seems like the name of the thing is overly complicated, an “L” bracket is a pretty simple thing.  A piece of metal in the shape of an “L”.  The long side of the L goes under your camera and screws into the tripod mount, the small side going up the left side usually.

We will get into why a photographer would want this piece of metal wrapped around their camera in a moment.  First let me say that there are two basic kinds of L-brackets.  There are “universal” L-brackets and then there are L-brackets made custom to your camera model.

My advice is to avoid the “universal” brackets.  Universal L-brackets tend to be lower quality and cause usability issues where some portion of your camera isn’t actually accessible as long as the L-bracket is on your camera.  We’ll talk about costs and some brands we can recommend in a moment.

Why Every Photographer Needs an L-Bracket

I contend that EVERY photographer should invest in an L-bracket. Let’s go through the five biggest reasons.

Most tripods are designed to hold your camera in the horizontal or landscape oriented position.  Many tripods do allow you to rotate the ball head so that you can get your camera into a portrait orientation, but it comes at the expense of functionality.  The tripod doesn’t function as well in that compromised position.

This effect is even worse for the release plates you can screw onto the bottom of your camera in the tripod mount.  They are just fine when the camera is positioned in landscape orientation on the tripod, but rotate it over to the side and that release plate just doesn’t hold the camera firmly no matter how hard you tighten that screw.

If however, the objective is getting the camera setup exactly where you want it and keeping it there, I am very confident the photographer who has an L-bracket and loosens the clamp of the ball head to rotate it is going to win.

If you are doing panorama shooting, there is no contest between L-bracket and a release plate.  Most of the time panoramas are taken with the camera in a portrait orientation on the tripod and if you have rotated the camera to the side of the ball head to put it there it is really difficult to position the camera so that it is level while you pan from shot to shot to shot in the panorama.

Without an L-bracket, you almost always end up with the camera taking an upward or a downward path as you pan in the panorama, which makes you have to cut off (or content-aware fill) a portion of it when you stitch things together in order to get horizons straight.

The majority of my photography is portrait photography these days.  I look forward to a time in my life where I do more landscape photography, but right now it is mostly portraits and I am having a ton of fun with it.  I mostly shoot my portraits without a tripod, which means an L-bracket is not a lot of benefit.  In fact, the added weight and bulk make it a bit of a negative when hand-holding the camera.

It isn’t such a negative when hand-holding the camera to make me take the L-bracket off.  In fact, I keep the L-bracket on my camera 100% of the time.  I actually find the L-bracket to be less of an issue for shooting hand-held than having the release plate on the bottom of the camera.

When I didn’t have an L-bracket, I would often start shooting hand-held and find the quick release plate to create an uneven surface on the bottom of the camera.  Awkward enough I would take that release plate off when hand-holding and that led to me losing release plates a couple of times.

I do shoot portraits using a tripod.  It is pretty critical for the volume team and individual shooting I do to make sure there is consistency from shot and shot for the athletes.  Having that L-bracket so much nicer for getting that camera stable for those shots in portrait orientation.

Being a bit of medal wrapped around half of your camera, there is some minor protection provided to help keep your camera from taking the brunt of a drip or a hit.

It isn’t the same as a full cage for your camera of course, but a good L-bracket can definitely provide some minor protection from bumps and bruises.

Downsides Of An L-Bracket For Photography

It isn’t all rainbows and unicorns. There are some downsides to using an L-bracket in photography. Let’s go through them.

Adds weight to your camera.  Not a huge amount of weight, but every little bit counts and it adds up.  Can also become a little harder to hand-hold the camera with this piece of metal wrapped around it.

There is the cost of the L-bracket.  Like everything in photography gear, you can spend a lot of money on these things.  The good news is there are some relatively inexpensive options.  The bad news is you may also have to replace your ball head to use an L-bracket.

I had heard other photographers talk about how much the L-bracket helped their photography, so I decided to get one only to discover I now had to replace the ball head I had been using.  Inexpensive ball heads tend to have a custom or proprietary mount and release plate.  They are designed for you to screw that custom release plate to the bottom of your camera and mount that to the ball head.  L-brackets are made to fit into an arca-swiss ball head mount.  If your ball head isn’t arca-swiss, you have to buy a new ball head to use an L-bracket.

Jeff: Gaffer Power Premium Grade Gaffer Tape ($18 for 2”x30 yards).  Used this to solve my problem of the USB-C hub dangling from my laptop while on a tripod stand.