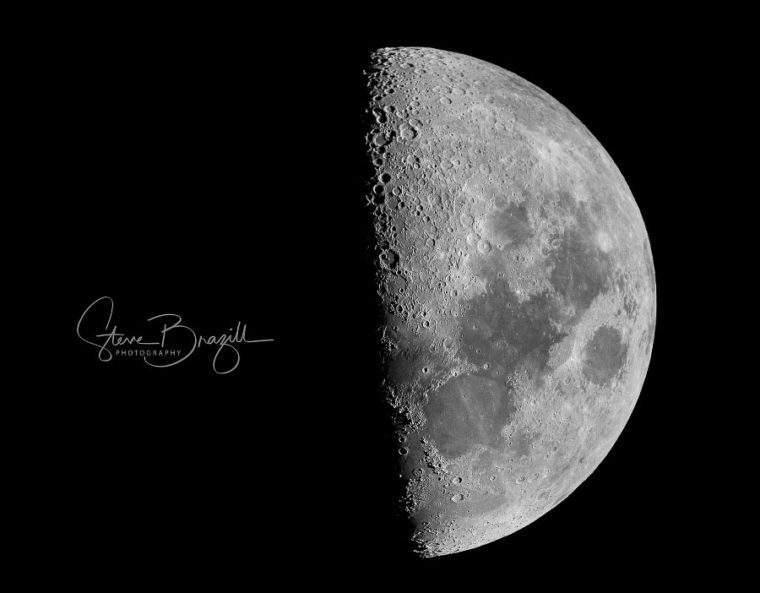 I have tried creating photos using a telescope and my camera.  It didn’t go well.  I asked my friend Steve Brazill, who has used a telescope to create some incredible photos of the moon, in hopes that I could figure out what I have been doing wrong. I am thinking/hoping that most of the problem was the crummy telescope I used.

My telescope is one of those terrible corporate gifts some companies offer to employees after they have been around for a while.  I would much rather have had the hundred bucks, or whatever it was, than this telescope – but I had to pick something from the catalog of garbage stuff so I chose the telescope hoping it would be good enough to use with my photography.

Let’s start off by talking about the telescope.

What Photographers Need In A Telescope

In the images shared below Steve used the Meade ETX-125 PE – f/15 – 1900mm – with Meade #678 Dew Shield. It is a telescope that Meade no longer makes, but there is an updated version of the scope they sell today in the Meade Instruments – ETX125 Observer. It is selling for about $1,500.

That ETX125 Observer is sure to work well, but at $1,500 it may very well be outside the price range of most photographers who want to give this kind of photography a try without investing so heavily.

Here are a couple of options.

Both of those would work well, and of course there are sites dedicated to listing the “Best Astrophotography Telescopes of (Insert your year here)”.

The main thing is that scopes today will have modern options perhaps, like GPS etc. Sometimes, extreme zoom makes the images worse. Capturing deep space can be much harder, and staying with less focal length and cropping can make a better image – depending on the optics etc. The scopes above are wide apertures, where as Steve’s scope, at 1900mm in focal length, is f/15!

Watch for the way you attach a camera. Steve’s has two options of a focal length and aperture combination. If your camera is not good at high ISO then an f/15 scope could be an issue. The closeup shot below was shot at 8000 ISO. If you had an f/10 scope that would allow a stop more light and you could use a smaller ISO. Getting to f/5, which the ETX125 Observer has, gives you 3 more stops of light!

How To Attach A Camera To A Telescope

To attach the camera to the telescope so that photographers can create images of the things in the night sky.  What do photographers need to do that?

This really depends on the method of attachment. Steve’s scope has a straight line rear point of attachment that requires an adapter like the Meade #64 (listed below). He doesn’t use that often because of the balance issues it causes.

To attempt to stabilize the scope for this kind of shooting through a telescope with the camera attached at the rear of the scope, Steve made his own counter-weight. You would think someone would sell a counterweight to add to your telescope, but at least for the Meade he has he hasn’t found something to do that.

It is hard enough to use that he usually attaches his camera through the standard eyepiece hole using a T-Ring / T-Mount adapter. He also uses the Meade Variable Projection Camera Adapter, which allows for more magnification and allows him to include an eyepiece to get even more magnification!

Here are links to the equipment Steve uses. These things are likely to fit a lot of telescope brands. You just have to make sure the eyepiece hole in your scope is the same size as the adapters listed here.

You will need something like the Meade T-Mount SLR Camera Adapter for Canon EOS to adapt from your lens mount to the eyering for most telescopes. These will be specific to your lens mount. Steve is shooting with a Canon camera so it is the EF mount. They should be about $15.

Not all telescopes support mounting a camera at the rear, but if yours does then you will need something like the Meade #64 T-Adapter – Rear Port Mount that should be about $35.

A little bit of an option piece of equipment because you can user your camera with a telescope without it, but Steve says this has been perhaps his most important equipment that helps him create photos of the night sky.

He uses the Meade Variable Projection Camera Adapter that might work on a lot of different kinds of telescopes as long as the eyepiece size is the same. You will need to find out the size of the eyepiece hole on your telescope and make sure you find a variable projection camera adapter that fits. Should be about $55.

This variable projection camera adapter both magnifies the image produced by the telescope and allows for eyepieces to be dropped inside so that they can also magnify the image.

The Meade Series 4000 Eyepiece and Filter Set provides an assortment of eye pieces that can be used to add different amounts of magnification depending on what you are shooting in the sky.

These may work on your telescope even if isn’t a Meade if the eyering whole is the same size. Should be about $180 for a good set.

The basic screw controls your telescope offers for adjusting focus can be really hard to use. This is another piece of equipment that is optional but Steve couldn’t live without. He uses the Flexible Focuser Extender for Meade for his telescope.

You probably want to find one specific to yours and it should run about $10.

Another piece of equipment you can drop down inside the variable projection camera adapter to get 2x the magnification. Steve uses the Meade #126 Barlow Lens – Doubles the Eyepiece Power that runs about $40.

Camera Settings For Shooting Through A Telescope

How do you figure out what settings you need to use to shoot through a telescope?

Aperture is determined by the telescope. You may have to do a little digging to find out what it is. Steve’s scope is f/15. Above are listed a couple of options with apertures of f/5 and f/8.7.

Steve recommends starting off with a shutter speed of 1/250. It may not seem like it when you are looking at the moon with your naked eye, but when you zoom in on that moon it is moving really fast.

Shooting at 1/250 of a second is a really good starting point at having something fast enough to freeze the moon and have sharp detail and still allowing a lot of light given the stopped down apertures of scopes.

If as you start shooting you just aren’t getting enough light you can try slowing the shutter some. Steve has had it go well with shutter speeds of 1/100 or even as slow as 1/80. There are a lot of variables there with how sturdy the telescope is with your camera attached and how high up in the sky the moon is as you are shooting.

Regardless of telescope or a normal lens, photographers should be ready to shoot the night sky at a high ISO. Steve often shoots at ISO 3200 with just the scope and camera, sometimes a bit more or less. Sometimes he has to go to ISO 8000 even with a shutter speed of 1/80.

Take test shots with the shutter as slow as you can get it without losing detail in the craters of the moon and then raise the ISO to get what you need for a good exposure.

Here are the two most recent photos Steve created with his camera attached to his Meade telescope.

Steve created this photo by shooting through the eyepiece with the variable projection camera adapter attached. The focal length of the telescope is 1900mm but the adapter adds some magnification so it is a little longer than that (hard to know exactly how much as it is variable). He slowed the shutter to 1/100 from the usual setting he tries for of 1/250 because the telescope aperture is f/15 and he wanted to keep the ISO as low as possible.

This shot was taken with an eyepiece added to the variable projection camera adapter for increased magnification. Notice that even with an aperture of f/15 provided by the telescope the depth of field is falling off on the left side of the frame.

Photographers could try to do focus stacking to address this problem with the depth of field, but the focus knobs here are moving things by less than 1/64 of an inch and it is hard just to get the moon in focus at all. The focus adjustments are a lot harder than with normal lenses and trying to get one shot with the focus at the front followed by one with the focus at the back is incredibly difficult.

Steve’s shots are amazing! I love them and I really want to give it a try again with the telescope I have to see if I can make it work better. However, if you want to get a more detailed shot of the moon than you can get with your lens alone you could give stacking a try.

This isn’t the stacking term you may be used to. This isn’t focus stacking or exposure stacking (using masking to blend various together shots with different exposures). This is taking a lot of photos with exactly the same settings and then having software use the data from all the photos to extrapolate significantly more detail.

This is my first attempt at using stacking for a sharp moon.  I used a lens that is over 20 years old, the Quantaray 70-300 f/4-5.6. This was taken on the Canon 80D. I shot 300 frames, but the stacking software analyzed the images and used only 169 of them in the stack.

I learned a lot doing this and after I do a lot more testing I’ll be doing another podcast on this process with a lot more detail.

If you aren’t inspired enough yet to try and get more interesting shots of the moon, here is another one Steve and I saw on Twitter the week we prepared for this episode. Andrew McCarthy created a photo of the moon using a similar stacking technique as I described above, taken to an entirely new level.

Andrew shot this image using a special camera built specifically for creating planetary shots (AS!174MM), on an equatorial mount, and a huge amount of post-processing.

Other Episodes With Steve Brazill

If you enjoyed this episode you should check out the other episode I did with Steve called The Curious Case Of The Decaying Photo where we go through a strange challenge a listener had with photos decaying off their hard drive over time and what we helped him with.